Overflowing garbage cans:how to prevent the 5 affects on health and environment

Overflowing garbage cans :how to prevent the 5 affects on health and environment

Due to the intensification of urbanization, cities around the world are facing huge challenges, and one of the main challenges is the increasing amount of waste and litter generated by high demand for food and other essentials. Public outdoor garbage containers are filled faster than ever before. Inevitably, many bins spill before they are collected, causing not only street clutter and stench, but also adverse health and environmental effects.

While in most developed countries, the efficiency of the waste collection process is sufficient to prevent major disasters, but in some cities local institutions have had fatal consequences for maintaining careless attitudes. One of the cities with major waste problems is Naples, where the mafia is accused of dumping toxic waste around the city, leading to a high incidence of cancer, allergies and birth defects. Another good example of a city with unsanitary conditions is Surat, India, where a pneumonic epidemic broke out in 1994, killing 52 people.

Although not as dangerous as dumping large amounts of toxic waste at city borders, containers filled with waste still pose a significant disruption and threat to our health and environment.In this article, we present five ways to solve the overflowing trash cans. 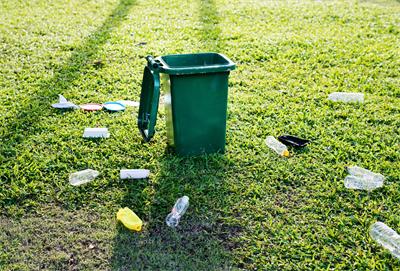 Bacteria, insects and pests thrive from the rubbish.

The overflowing bin is an ideal breeding ground for bacteria, insects and pests. The flies that visit the trash are the same as the flies that walk on your lunch table and will lay down their offspring on your plate. Doing so will increase your risk of getting Salmonella, which can cause typhoid fever, food poisoning, intestinal heat, gastroenteritis and other diseases. In addition to flies, other animals that thrive in trash cans and surrounding garbage include rats, foxes, and stray dogs.

One of the consequences of the flooding is air pollution. When pollutants are absorbed from the lungs to other parts of the body, air pollution can cause various respiratory diseases and other problems affecting human health. Toxic substances contaminated with waste in the air include carbon dioxide, nitrous oxide and methane. In daily life, we often identify contaminated air by stench, which is usually caused by decomposition and waste.

Garbage and liquid waste that is ultimately produced in the water will have a negative impact on the chemical composition of the water. Technically, this type of pollution is called water pollution. It affects all ecosystems that exist in the water, including fish and other animals that drink polluted water. Dangerous household waste, such as batteries, computer equipment and residual paint, is particularly dangerous to surface water.

For garbage collectors, the risks of picking up and handling spilled food include infections, chronic diseases and accidents. Direct contact with waste can lead to skin and blood infections, including wound infections, various diseases caused by animal bites from eating waste, and intestinal infections transmitted by waste-fed flies. Collecting spilled trash is also dangerous because of sharp objects, needles and potentially hazardous waste.

Inefficient waste control is not conducive to the health of the city.

In addition to causing a variety of health and environmental problems, overflowing rubbish is also a public hazard and dazzling thing. Everyone wants to live and visit fresh, clean and healthy places. A stinking city with poor garbage and sanitation can't attract people or tourists, let alone invest. Cities continue to lose money, and they also miss out on the income and employment opportunities brought about by proper waste control and recycling.