Why is China So eager To Implement Garbage Classification Policy？

Why is China in such a rush to separate waste? It is because China is a big producer of waste. As early as 2004, China surpassed the United States as the world's largest garbage producer. China's annual output of domestic waste is about 400 million tons, and the growth rate in a year is about 8 percent.

In 2010, director wang JiuLiang shocked the world with a film called Garbage Siege. The documentary shows that Beijing is surrounded by large and small garbage dumps, which form the "seven rings" of Beijing, while the pollution of land and water is shocking.

In Hong Kong, the flooding caused by the typhoon washed a large amount of ocean garbage into the city, turning many low-lying areas into a garbage kingdom. Seawater by the typhoon, carried tons of garbage which the human dumping in the sea back, dense. There is plastic everywhere, which is shocking. These daily garbages which are discarded did not disappear, and there will always be another form of life. It could be in the wind, in the water, in the meat and dairy products from the pigs, cows and sheep that feed on garbages, and it could be the organic fruits and vegetables that are grown in landfills. 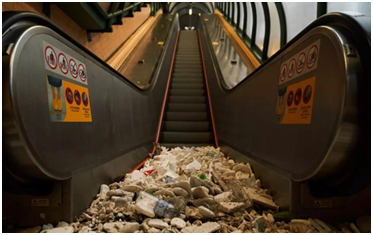 Why is China in such a rush to separate waste? The fundamental reason is that we have paid a heavy environmental and health price for poor disposal of garbage over the years. The decaying matter and dirty water seep into the ground, contaminating the water source of people's life and drinking. As long as we need water, no one can escape from the garbage poisoning of the body.

Why is China in such a rush to separate waste? It is because that maybe one piece of garbage will lead to the extinction of Marine life. About 8 million tons of plastic waste enters the ocean each year, all of which can circle the earth 420 times, and more than 50 species of fish have been found to be eating plastic waste. At least a billion Marine life is lost to plastic every year!

And where do these garbages come? It may be that groups of tourists don't throw their rubbish into outdoor trash canswhen playing in the sea, which leads to more and more rubbish in the sea. Perhaps there aren't enough outdoor storage cans in the city for residents. It may also be that the galvanized trash cans are not galvanized bins with lids, which cannot block the bad smell and make people reluctant to approach. It may also be the lack of large garbage cans in supermarkets and factories, which leads to incomplete garbage classification and treatment. It could also be that the plastic bins are not as durable as galvanized bins and are replaced in time after breaking.