If You Want to Transcend Disney, Design a Special Trash Can At First

If You Want to Transcend Disney, Design a Special Trash Can At First

In most theme parks, pull out trash can with lid, cash machines, lockers, commemorative coin machines and other service facilities are very inconspicuous. There are always only a point on the drawing or they even do not be pointed. But as long as you design it with your heart, it will become an important carrier which is set up in the theme park and will become the most shining point in the theme park.

Efteling is the largest theme park in the Netherlands and it is also the most popular playground for children. It presents the contents of many western fables in real life. The protagonists of the story, such as Snow White, Little Red Riding Hood are realistic. In this theme park, the trash can is designed to be a fat guy’s mouth. When the garbage is thrown in, it will talk to you.

Besides, in the theme park, we can find a trash can with locking lid which looks like a barrel. When you throw garbages into it, you will hear the rumble sound. What's more, the designer even made the trash can as a little pig's house. Which is very unique and funny for children. Besides, it can avoid children throw the garbages out of the trash bin. Because the trash bin looks like a pig’s house to let children pay attention to throw the garbages into the trash bin. So that you will find the trash can not only can help the park be much cleaner, but also it will be one of the popular places in this park for people to have fun. 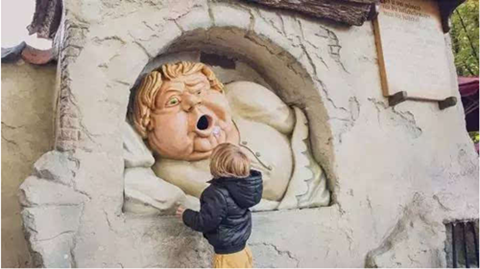 In Disney Epcot Center, the trash bins are perfectly integrated with the surrounding silver-gray buildings. Although the shape is normal, the bottle is outstanding enough to indirectly highlight the location of the garbage can with wheels. Besides, there are many famous logo pattern on the trash bins, such as Mickey Mouse. Which let the trash bins more cute on the surface.

In the Hong Kong Disneyland, there are some trash bins that can walking and speaking in the theme park. It can play a good role in its normal function such as storing garbages and cleaning ground. On the other hand, it also can play a good role to let people have fun with it. When people go to throw garbages, it will talk with you that can make you feel novel and interesting. What's more, because the trash bins can move itself, so the merchant can reduce the cost of buying metal garbage can with lid and its park environment will not be influenced. It also can attract more people come here to see the moving trash bins and play with it in a special-purpose trip. 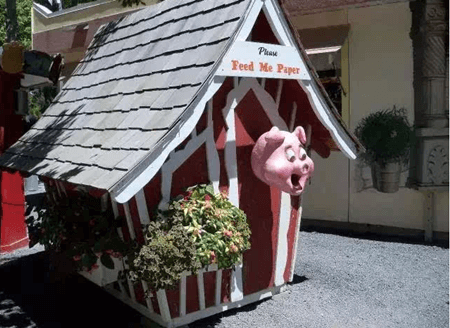 The Advantages of Creative Trash Bins

These creative trash bins in the theme parks we told above have an important role in protecting the parks environment. Some of them are very unique for persons to let them be careful in throwing garbages. Which can avoid people throw out of the trash bins. The other of them are high-technical which also can attract people's attention. What's more, compared to those normal trash bins, this type of trash bins can do better in storing garbages. Although their cost is very expensive, but you can reduce the amount of them, let one of them control one area in the parks. So that in can reduce the cost of them. Besides, this type of trash bins can give more economic benefit for you to get profits.